Shrinking of the polar ice cap allows for a longer and safer navigation season in polar waters. Since the 1970s, the Earth Observation (EO) satellites provide daily pan-Arctic surveys of the sea ice [1]. The image painted by the data leaves no doubt: the Arctic ice cap is shrinking and shrinking fast. September’s 2020 sea ice minimum is among the lowest in satellite record; ice extent has shrunk from 7 Mkm2 to 4 Mkm2 (mean 1970-2010 vs 2020) [2]. Not only is this a threat to local and global ecosystems in itself. With shrinking ice cover, the region is more accessible and commercial activities in the Arctic are bound to rise. Increased traffic stirs concerns about the safety of people and protection of the pristine Arctic environment. Due to the remoteness and harsh climate, EO data is indispensable for the prompt reaction of emergency services in the Arctic. It is a vital tool for obtaining information on ice and weather condition, crucial for the safety of shipping and maritime activities. Hazards such as collisions with icebergs, pressure zones induced by winds and currents can cause loss of ship or crew and widespread pollution by oil spills. These threats can be forecasted and avoided with the EO techniques. 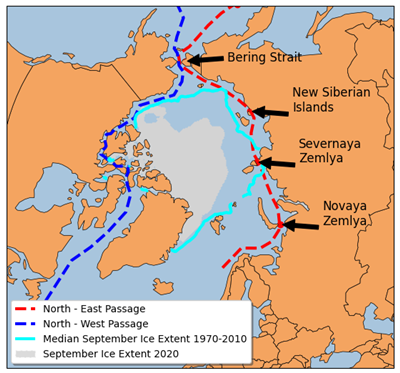 Figure 1. Arctic Shipping routes: North-East Passage (red) and North-West Passage (blue). With September ice extent for 2020 in the grey and long-term median as a cyan line.

Monitoring of ice conditions on the most frequented Arctic shipping routes has two aspects, ‘tactical’ and ‘strategic’. The ‘tactical’ aspect concerns the prompt reporting on ice concentration and thickness in the immediate vicinity of the ship. In this regard, the optical sensors are of limited use as poor visibility, low clouds, and long nights hinder the observation. Microwave sensors are not limited by notorious polar cloudiness or darkness. Space-born microwave sensors provide daily pan-Arctic sea ice observations. The high spatial resolution (10-30m) of synthetic aperture radar (SAR) is especially useful for collision avoidance and tracking of large icebergs [3][4][5]. With adequate information, captains can route the ships to cut the passage time and fuel expenses as well as avoid damage to the ship or even being stuck in thick pack ice. 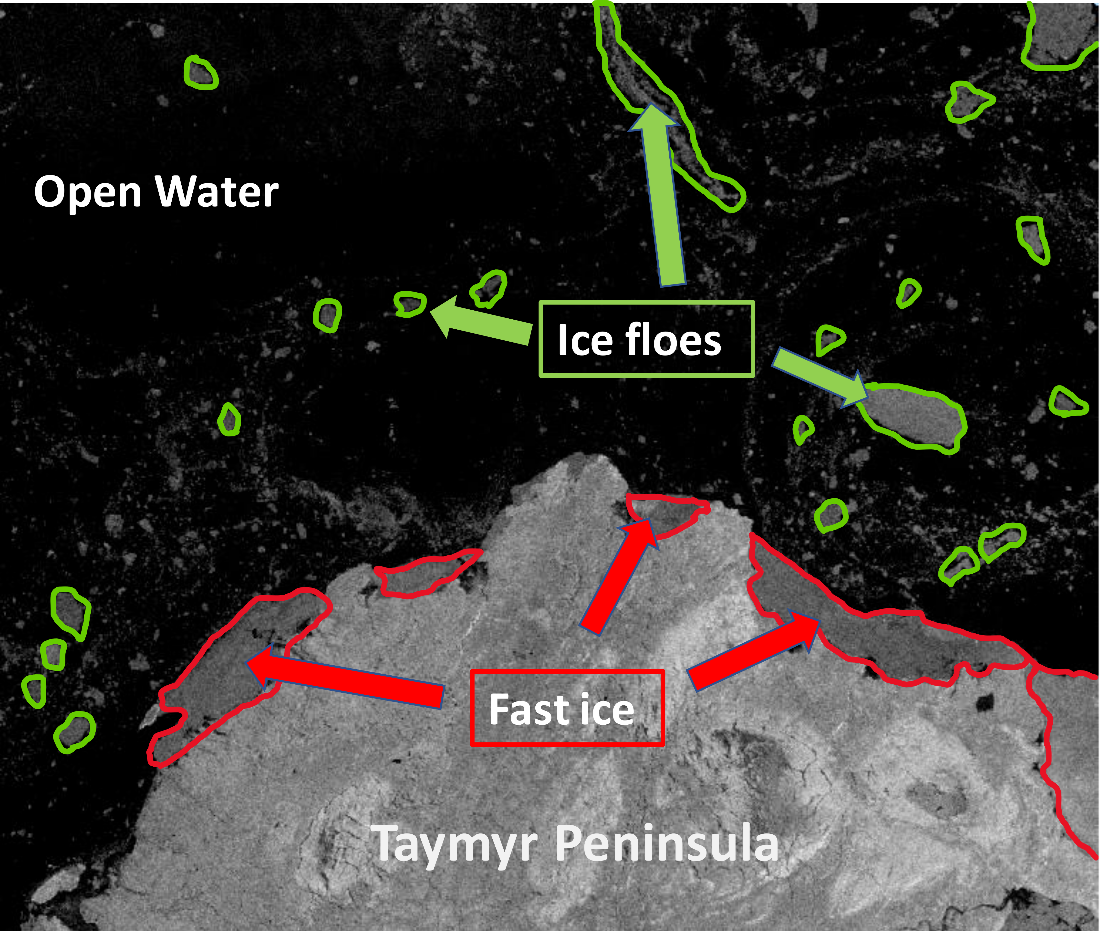 Figure 2. Sentinel 1 SAR image (VV 2017-08-10) of Vilkitsky Strait. The strait separates Severnaya Zemlya from mainland Russia, and it is a chokepoint on the North-East Passage frequently clogged by ice. The SAR imagery is essential for ‘tactical’ applications in ice navigation. At the bottom of the figure, we see the Taymyr Peninsula with fast ice along the coast (red), mostly open water of the strait is dotted with some ice floes (green).

If the ship and the crew are analogous to the ‘troops on the ground’, the ships’ operators and governmental agencies are akin to generals that do the ‘strategic’ planning of the season or multisession operations. The shipping industry in hostile environment of the Arctic necessitates adequate risks assessment, a factor that is indispensable for insurance and for safe planning of the operations. The long-term observation of the ice pack shows patterns of seasonality that can be used to design adequate protection and strengthening of ships hulls suitable for the region and season. Acknowledging the increased commercial activity in the Arctic, The International Maritime Organization (IMO) introduced the Polar Code [6]. The Polar Code provides rules ensuring the crew’s safety and environmental protection. It also stipulates the classification of ships based on their ice-strengthen construction. The ice-class of the ship in sync with the time and region of operation are factors to be considered when risk premiums of the insurance companies are calculated. For instance, ‘class PC4:  Year-round operation in thick first-year ice, which may include old ice inclusions’. However, due to the lack of data and relatedly infrequent (so far) transits, it is hard to verify which regions are safe to operate for a given ship category. Enter Earth Observation (EO).

By merging the available data sets on sea ice concentration [7], sea ice thickness [8] and ice age [9], we can derive statistics on the ice conditions corresponding to categories described by the IMO Polar Code. Figure 3 shows an example of such analysis; mean sea ice conditions on the Northern Sea Route 2009-2020, classified by Polar Code categories. Such synthesis of multiple data sources delivers easy to interpret information that can be directly applied to the IMO regulations. It is an example of how well-established businesses such as shipping companies and insurers can profit from EO data. The need for tailored risk assessment is emphasized in the “Manage the risk in the North” paper by Micheale Kingston in Lloyd’s Lists Maritime Intelligence [10]. Helle Hammer from The International Union of Marine Insurance (IUMI) joins the choir voicing the hurdles faced by the industry …” Risk assessment for underwriting purposes is inherently difficult for Polar transits. A lack of historical data coupled with the remoteness and harsh conditions means that cover is currently being written on a case-by-case basis”… [11]. We believe that hearing the voices of the industry is the key for proper identification of its needs. Custom analysis of EO data addressing these needs enables conscious decision making.

In this example we use the data from the Copernicus programme, and other publicly available datasets from the European Space Agency (ESA) as well as from the National Snow & Ice Data Center (NSIDC).

Analysis, interpretation, and visualization of the data was done by PARSEC Consortium member EVERSIS.